When the Bolsheviks seized power in 1917, new Soviet leadership grappled with the best way to abolish religious thought and establish a climate of atheism. They looted churches, synagogues, and mosques of anything of monetary value, taking jewels and precious metals. They also arrested the clergy and imams across Soviet-controlled territories. But closing places of worship was not enough to eradicate religious belief. To achieve that they had to change attitudes.

In the 1920s, the Bolsheviks embarked on an ambitious campaign to alter social attitudes towards religion. Going one step further than closing and looting religious buildings, the party established a task force named the Comissariat of Enlightenment to change public opinion. As part of the campaign to extract religion from the hearts of the masses, the task force opened museums dedicated to atheism.

Many of the museums were housed in prominent religious buildings. In 1932, Kazan Cathedral in St. Petersburg was closed and re-opened as a museum dedicated to atheist beliefs. Itchen Kala, a prominent place of Islamic instruction, and the Dominican Church in L’viv, Ukraine, were two other sites chosen to become atheist museums.

Inside the museums, the Soviet authorities used religious artefacts and icons to expose flaws in religious thought. They exhumed the relics of saints and revealed the clergy’s “tricks” behind famous miracles. One exhibition included a crying portrait of the Virgin Mary which wept real tears. The exhibit then revealed the eyedropper behind the painting that the clergy had used to fool the unsuspecting public. 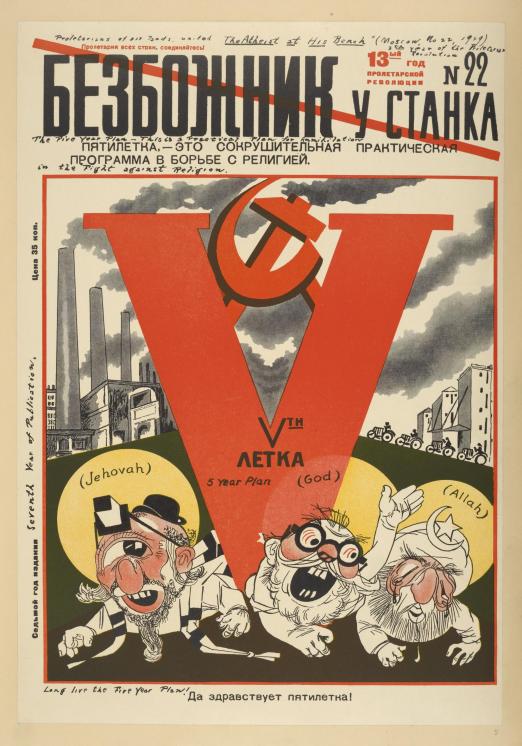 An example of the 1920’s Soviet propaganda. The Soviet 5-year plan is crushing the gods of the Abrahamic religions.

Propaganda posters lined the walls, including a depiction of Jesus turning water into wine captioned “the original moonshiner”. Church revenues were published along with individual clergy earnings, painting a picture of the church as a for-profit institute. They also juxtaposed Christian beliefs with primitive beliefs in witchcraft, displaying voodoo dolls, highlighting the absurdity in religious thought and presenting Marxism as a more enlightened way of thinking.

Science and rational thought was the thread that linked each exhibit together. The museums dismantled the foundations of religious belief, then sought to rebuild them on scientific facts. Fossils of early humanoids were displayed to show man’s evolution.

But did it work? The museums were certainly popular. The Kazan Cathedral in St. Petersburg reported over 700,000 visitors in 1963. However, despite its best efforts, the Soviet government was unable to break the religious spirit of the population.

Part of the problem was that it was swayed by financial rewards. Religious groups were able to rent their places of worship back and continue practising, albeit for a highly inflated price.

Religious services continued. As the memory of the ideological fervour of 1917 faded into the background, Soviet citizens increasingly returned to religion as a form of ideological stimulation. By the 1980s, the war against religion was lost and interest in religious services and practices was rising once more.

This is most evident following the fall of the Soviet Union. In almost every case, the hundreds of atheist museums immediately reverted back to their original religious purposes.