The Alabama landscape is littered with nods to its Confederate past. A visitor driving between Birmingham and Montgomery may notice the rolling greenery is frequently interrupted with the crimson and blues of the Confederate flag. This was the “cradle of the Confederacy” and the flags today are a visual echo that has rippled through the decades since the Civil War.

Montgomery has no less than 59 monuments dedicated to the Confederacy. The narrative of the history of the Deep South is dominated by one perspective. Alabama has a host of monuments, museums, and flags to honour its Confederate past, but until now, none dedicated to the victims of the atrocities that came with that historical epoch.

Lynching from white supremacists was endemic across the South. It was responsible for more than 4,400 deaths between 1877 and 1950 and amounted to nothing less than a domestic holocaust of African Americans. The scores of victims have no monuments, museums, or flags. Their memory does not litter the Alabama landscape. They have been reduced to the margins of history in the South.

The National Memorial for Peace and Justice sits on a six-acre site near the Alabama State Capitol, overlooking a former artery of the slave trade, the Alabama River. It is America’s first monument dedicated to the African American lynching victims.

When the memorial opened in April, hundreds turned out to file through the 800 steel columns engraved with the names of African American lynching victims. Each column hangs eerily in the air, just like the victims they remember. One column for each county where a lynching occurred. 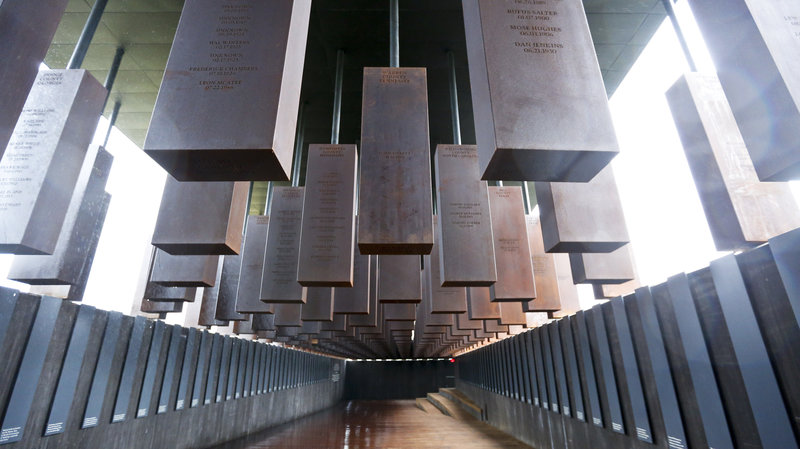 This is America’s first opportunity to grieve for these victims. Under the hanging columns, lays an exact replica of each column on the ground. The idea is that the respective counties will claim the replica and erect their own monument to their respective victims.

The site is home to several chilling art installations dedicated to the memorial’s chilling subject matter. One which stays with visitors long after they have left, features hundreds of glass jars, each with the name of a victim inscribed on the glass, filled with dirt from the location of their murders. The hues of brown, red, and orange, blend together to paint a haunting picture of America’s geographical makeup.

The memorial seamlessly ties the lynching of the early twentieth century to contemporary challenges plaguing the African American population. An art instalment by Hank Willis Thomas shows a line of raised hands jutting out of a concrete block, depicting an arrest scene.

The history of the American South is too frequently only half-revealed. Beyond creating a stunning, thought-provoking memorial to the often-overlooked victims of lynch mobs, the EJI is challenging America to confront the ghosts of its past.

For every confederate-flag-wielding patriot, let there be an equally patriotic citizen of the South honouring and ululating the names of the African American victims who met their ends at the hands of white supremacists.

Image of columns by Brynn Anderson/AP

Image of sculpture by Brynn Anderson/AP