“What women are they; warring together before their defenceless king; day after day the dark guard him, but the fair go forth for attack?” –Odin, the Norse god of wisdom, poetry, war, death, divination, and magic.

In the iconic Norse saga of Hervor and Heidrick, Odin, disguised as Gestumblindi utters the riddle to King Heidrick. The answer: hnefatafl.

Hnefatafl (pronounced nefa-tafl) was a Viking board game which tested players skill, wit, and strategy. One player would play as the King, his piece begins in the middle of the board surrounded by his dark coloured guards. Their opponent would play as the white pieces, which surround the king on all sides of the board.

The King’s objective is to escape the board, simulating a real army ensnared by the enemy, looking to escape with the King’s life. The attackers in white begin the game with the numerical advantage. The attacking force begins with 24 soldiers, positioned in four groups of six along the four sides of the quadrilateral board. The King’s guards, on the other hand, comprise of just 12 guards and the King himself.

The attacking team would win the game by positioning the white pieces on all four squares surrounding the King. It is believed that each piece could move in vertical and horizontal movements, one space at a time, much like a pawn in chess. 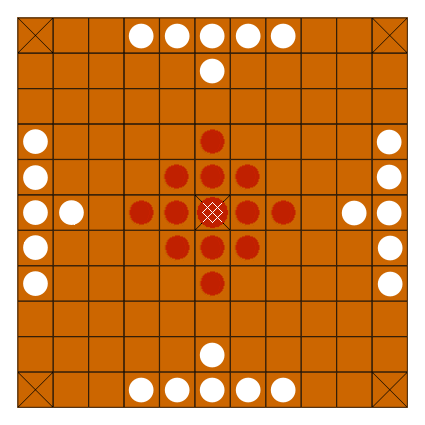 The game begins appearing in archaeological sites dating from around the 7th century, however, it is mentioned in texts dating from as early as 60AD. Its pieces were carefully carved from pieces of glass or whalebone. Norsemen clearly travelled with the game in their ships as forms of game pieces have been unearthed in sites across modern-day Russia, Ukraine, Ireland, Scotland, Greenland, the Faroe Islands, Wales, and England.

hnefatafl appears to have grown in popularity alongside chess. There have even been boards unearthed that had a chess board on one side, and a board for hnefatafl on the other.

It is clear that hneftafl occupied a central position in Viking culture. Viking burials excavated in Scandinavia have revealed that Norsemen were often buried with boards of pieces either in the grave alongside the body, or with pieces positioned on top of the burial sites. This could have stemmed from a belief that the deceased may have needed the pieces to play games in the afterlife.

Similarly, grave sites belonging to high-ranking Vikings produced hnefatafl pieces ornately carved and made from precious materials. It seems that part of the lavish lifestyle of Norse lords included procuring hnefatafl set made with high-quality materials.

The game reinforces the interpretation of Vikings as a warrior-focused society. The narrative that plays out in the game, of a vastly outnumbered warrior-King fighting for his survival, reflects the narrative of military prestige and bravery that has dominated our interpretation of Nordic culture.