Madi Zhasekenov remembers growing up in his home in Aralsk. He would spend the summers of his youth talking to fishermen at the port near his house and building fishing lures to dangle them in the turquoise waters, coaxing the fish onto the lines.

When the weather turned, and the sea froze over, the opportunities for fishing remained for those willing to brave the elements.

Today, Omirserik Ibragimov dons his red gloves to protect his hands from the winter’s bite. With the patience of a seasoned fisherman, who has mastered both time and fish, he dangles his net through a hole in the ice, pulling in Bream and Pike-Perch to sell on the local market.

The two scenes took place more than 40 years apart. But for much of the time in between Madi and Omirserik’s fishing experiences, neither would have been able to catch anything.

The Aral Sea was once the fourth-largest inland body of water on earth. It crawled across the landscape for 26,000 square miles from Kazakhstan to Uzbekistan. It also fed the Soviet Union, providing 13% of the country’s total fish stocks from its 48,000 tonnes of fish caught annually.

Then in the 1950s, the Soviet government diverted the Amu Darya and Syr Darya rivers to serve the Soviet cotton industry.

The disruption caused a decrease in the water flow to the Aral Sea, which prompted the sea’s salinity to rocket. The freshwater fish species soon perished in the uninhabitable water, leaving the Aral Sea barren.

“We didn’t know how to buy fish because we just always used to catch them,” Madi Zhasekenov remembers, “the first time I went to the market to buy it, it was just a very bad feeling”.

Sand reclaimed the former seabed. The watery landscape receded by some 60km from the fishing villages that had once lined the banks, leaving nothing but desert in its place.

“The people destroyed the sea and then nature took revenge on the people”, Zhasekenov explained. For those that remained in their villages, harsh weather ravaged their health and livelihoods.

The dust from the exposed seabed became churned up in violent dust storms, causing respiratory diseases among local residents.

But in 2005, as part of a $86 million project financed by the World Bank, a dam was constructed on the Syr Darya River. Almost immediately the water levels increased by around 11 feet.

The salinity decreased from 30 grams per litre of water to just eight over the next few months. This brought back more than 20 species of fish that had perished in the 1980s.

The sea began to creep back towards the almost-abandoned villages. Villagers began to return, enticed by the revival of the regions fishing industry. Fishing catches increased from 600 tonnes in 1996 to 7,200 tonnes in 2016.

It is clear the sea will never return to its former size. However, the policy decisions aimed at reversing the decimation of the Aral landscape is an undeniable success story.

The next phase of the plan will see the walls raised on the Kokaral Dam to further increase the water levels. It is estimated that another four metres of dam wall could extend the sea by another 400 square kilometres. However, the plan requires the approval of the Kazakh government before it can move forward.

There is still much to be done on the Southern side of the Aral Sea as well. While Kazakhstan is enjoying the sea’s revival, on the Uzbek side of the sea, the landscape remains barren, with only the occasional abandoned ship jutting out of the horizon like a defiant tombstone. 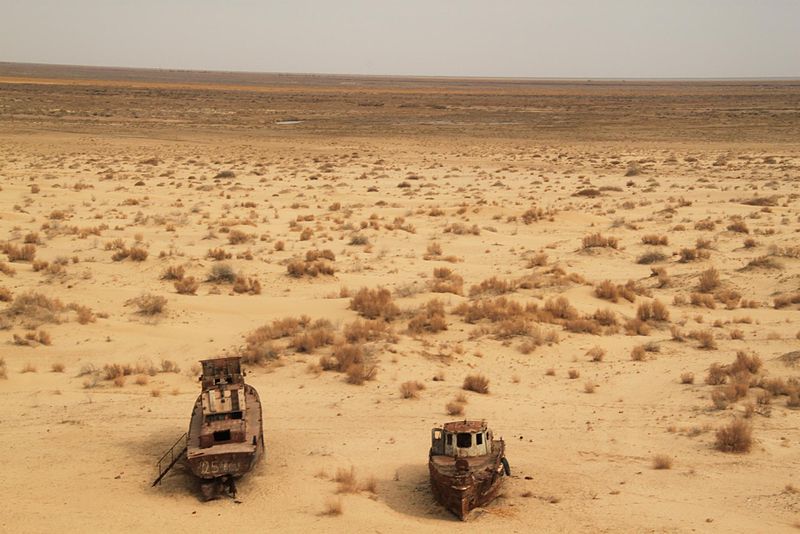 There will be no quick fixes, even with the raised dam, but many residents are optimistic the Aral Sea will continue to build on its successes.

Kirdibai Ibragimov cuts fish on the floor of his home, his short white hair bobbing up and down as he speaks. “The sea is the source of life for us,” he explains, “my son will get married and he will continue fishing”. For the residents, failure is not an option. The sea must provide.